UAE or The UAE - Correct Grammar. US or The US. UK or The UK. 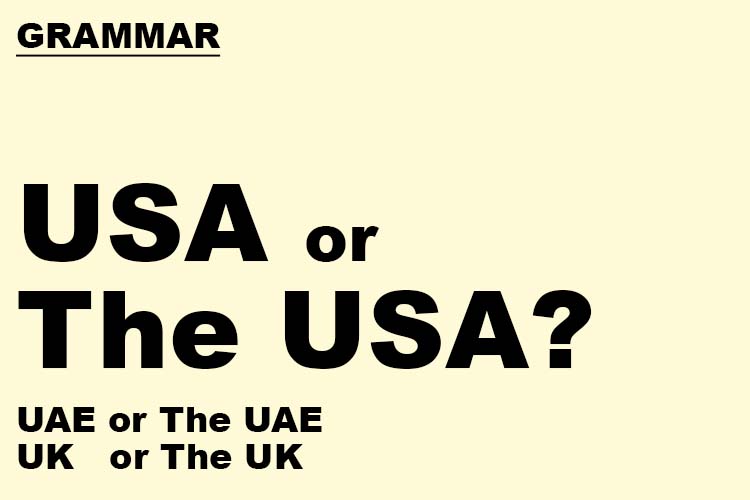 This is a topic which you will hardly get detailed information about on the internet despite its significance. At times, people seem to take some things as though they are insignificant and tend to be ignorant of them. Meanwhile as minor as they look, they are enough to mar a whole content and render it worthless. I see a lot of blogs, articles where people misuse the position of the country name, some including the article “the” when they only feel it, and some ignoring it even when it is a compulsion to adding it. With contradictions all over, you can’t help but get confused as to which form is correct and which is not. But trust me; you will be more enlightened after this piece.

The correct use is “the UAE”, “the USA”, and “the UK”. They must have the article “the” when they are used in a sentence. As a general rule concerning the use of articles, bear in mind that, whenever the name of a country comes in a “plural form”, we have to include the definite article “the” before it.

So, with this rule, the United Arab Emirates is shortened as “the UAE”. This also applies to the United States of America, the United Kingdom, and a few others.

This also has some limitations. The limitations will be explained. Also, more light will be shed on other countries that might want to bring about confusion, make sure to follow closely until the end.

As a general rule concerning the use of articles, bear in mind that, whenever the name of a country comes in a “plural form”, we have to include the definite article “the” before it. So, with this rule, the United Arab Emirates is shortened as “the UAE”. This also applies to the United States of America, the United Kingdom, and a few others. Meanwhile, this also has some limitations. The limitations will be explained.

Also, there are a few examples of Islands that carry the article “the” even if they are shortened (by dropping the “Islands” attached with them) e.g. the Azores, the Canaries, the Galapagos. But nobody dares to shorten “the Virgin Islands” to “Virgins” because that could bring about some misunderstanding.

You might begin to wonder as to why it occurs like that above. Well, The straight forward answer to that is “the determining factor here is all about Singular and Plural” (regarding the above example). In another version, it is said that, losing the article “the” is the last process in the evolution of a country’s name. Sounds confusing right?

Don’t worry it will all get clearer, I’ll make sure to leave no stone unturned in this piece.

Taking “Spain” for a case study, the Spain of today does not have the definite article “the” associated with it. That’s true today but that was certainly not always the case. Back in the Roman Era, there existed more than one Roman province at various periods (Hispania Citerior Hispania Ulterior, Hispania Tarraconensis, Hispania Baetica, and Hispania Lusitania). What we now call the Iberian Peninsular was called Hispania. During the 15th century, Fernando de Aragon and Isabel de Castilla were referred to as “Reyes de las Espanal”, but now that it is a single entity, Nobody would use “Las Espanal” or “En la Espanal” but instead “En Espana”, the definite article “the” associated to the country’s name then has been removed from it. This also goes for Ukraine. Initially, we call it “the Ukraine” but over time, the nation declared it prefers to simply be called “Ukraine”, the same as the case of Sudan and a few others.

How to know when to include the article, the, before a country name.

Before I delve into more detailed information, let’s have a brief of the 3 Union federations the question was initially focused on (the UAE, the USA, and the UK).

How to know when to include the article, the, before a country name.

I’m pretty sure you have a question pondering inside of you as to “How do I know precisely when to use the article “the” when referring to a nation and when not to. Well, as a general rule, it happens when one of the keywords in the country’s name requires an article. This can be in two forms,

An exception of the general rule in usage of the article, the, before country names

However, this rule has an exception, if the country is being referred to as being a team of the country (Team USA, UAE won the competition, etc.) or when it is written to show that something was made in the country (Made in USA, made in China, etc.), in these cases, the article “the” has no function to perform.

We can say, As a guideline, things to keep in mind to know when to add the article “the” before a country name is;

The Unpredictability only surfaces when geographic or political features are unclear or forgotten. For example, Ukraine means “Borderland”, Lebanon was named after a mountain range, Sudan was named after a desert, and Gambia after a river, but none of these above mentioned use a definite article. Most of these countries’ governments personally showed their dislike for the definite article description and declared it should be removed from their country name that is why they are exceptions.

Also, note that some of the countries that have “United” and “Republic” attached to them also have cases when they can go in a sentence without the definite article “the”.

“He’s from the Federal Republic of Nigeria” can also become “He’s from Nigeria” etc.

Finally, A few examples of countries that do not have the definite article “the” associated with them are; India, Turkey, Iran, South Africa, Saudi Arabia, Ghana, Togo, Qatar, Kuwait, etc.