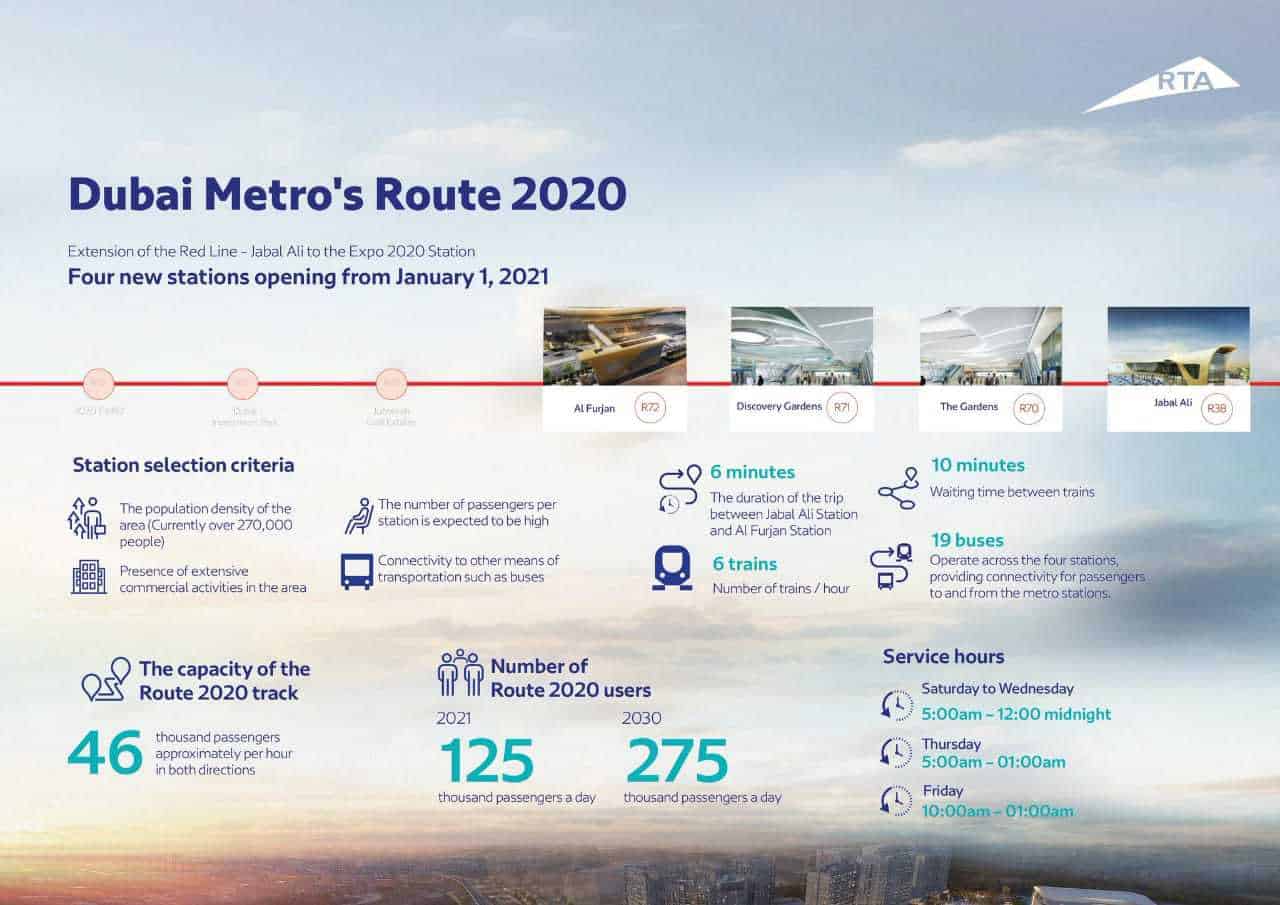 It has been officially confirmed that the new addition to the Dubai Metro will be operational on January 1st, 2021. In this phase, four stations will be functional which are Jebel Ali (interchange station), The Gardens, Discovery Gardens, and Al Furjan Station. Trains will run at a ten-minute interval. Mattar Mohammed Al Tayer, Director-General, Chairman of the Board of Executive Directors of the Roads and Transport Authority (RTA) announced this on the official Twitter handle of RTA.

The Dubai Metro system is one of the various means of transport in Dubai. It is no doubt an integral aspect of the city’s liveliness, as a result, cannot be intentionally omitted when talking about the city’s features. Since the inception of the Metro in September 2009, it has drastically ignited a great positive impact in the portrait of the city. Moving around the city is now easier and cheaper. The system started with a single route when it was introduced back in 2009, and another was added in 2011.

Before talking about the daily time of operation, I’ll like to introduce you to routes taken by the trains, which brings us to the Dubai Metro Map.

The mode of operation of the trains is dependent on the route which is assigned to them on the map, these routes are called “Lines”.  As seen on the map, we have the “Red Line” and the “Green Line”.

Each of the circles represents different train stops. These trains stops are spots where the train pauses to enable passengers to alight (when they get to their respective destinations). Meanwhile, both lines meet at two spots in the city; Burjuman and Union. Due to the intersection here, these two areas tend to be very busy. They are the busiest train stops in the city.

To board these trains is very much easy, All you have to do is visit the platforms that are available for your proposed destination, there are two platforms for each line. For the Redline, the available platforms for boarding are; Al Rashidiya and Jabel Ali (also known as UAE Exchange), while the available platforms for the Greenline are; Etisalat and Creek. These are the starting and ending points of the trains. So, it is important to study the map closely to know which one leads to your destination to enable you to decide the platform where you’ll board the train. Interestingly, the metro system scheduling is so perfected that a train is always available to board at every station every 5 minutes. In Redline on weekdays, the interval reduces to 2 minutes.

The list below is arranged according to how the areas follow each other through from the starting point (first platform) to the last point (Last platform).

The metro stations along the red line are:

The metro stations along the green line are:

The metro stations along the new purple line are:

From the Metro map, you will notice that the city is subdivided into 7 zones. The metro currently runs across four zones which are Zone 1, Zone 2, Zone 6, and Zone5. You should know that the cost of your journey is directly proportional to the number of zones you pass through before arriving at your destination. Meanwhile, The charging system does not only apply to the Metro but also applicable to other means of transportation like the use of Buses, Tram, and Water buses. I’ll still talk briefly about the fares, so make sure to read on.

Dubai Metro operates all through the week. Meanwhile, both lines have a different time they open and close daily. Below is detailed information on the official open and closing hours.

Last train timings are as follows:

The minimum fare for the Dubai Metro or Bus is AED 3 for a standard card if you travel in one zone. If you travel to two zones, you must pay AED 5. If you travel 3 or more zones, it is the maximum charge for a one-way trip of AED 7.5. Note that you need a minimum of 7.5 AED on your card to be able to begin the journey.

If you do not have AED 7.5 in card the metro gates won’t open and by bus, it would beep an alert. Please note that there are periodic ticket inspectors on the bus and in the metro, travelling without the required minimum balance will be punishable by fines.

Where to recharge Dubai Metro/Bus cards?

Metro cards and Bus cards are the same. They are NOL cards. You can recharge them in the machines available at the metro stations. In every station, there is a minimum of two machines. and in Intersection stations such as Burjuman and Union, there are at least 6 machines. Or you could go to the counter and recharge it with the counter executive. Both Cash and Cards are accepted in machines/counters.

Please note that Due to COVID-19, counters only accept card payments. Cash payers must use the machine.

There are ticket counters in Bus Stations as well where you can recharge from the counter or the machine. Apart from these, there are recharge machines in several small bus stops across Dubai. However, not all bus stops have it.

To have access to any public transportation system in Dubai, you will have to procure an electronic access card which is known as the Dubai NOL card. This card is required for seat reservations on the Metro trains. Amazingly, the card is not only useful here, but it is also useful to access varieties of RTA services like Parking fees, taking taxis around the city, as well as for water buses.

Presently, there are five different varieties of NOL cards in Dubai. These varieties are due to benefits attached to them and the purposes they serve which supersedes one another, thereby having different costs according to your budget. Below are the different types we have;

As said earlier in this piece, your travel fare is estmated depending on the number of zones your journey cuts across and is deducted automatically from your card after checking out.

Checking-in into the metro:

Checking-out of the Metro:

After a successful check-out, the system automatically makes estimations and deducts the total cost of your trip which is a function of the zones traveled through, and the cabin registered.

Dubai Metro is connected with Buses as well. If you board a bus immediately after the metro travel to continue your journey in the same zone you will not be charged additionally. However, if you cross the zone, the charges will apply.

Whichever cabin it is you can afford, trust me you would enjoy the ride to your destination.

It is of a popular saying that;” wherever there is no law, nothing is seen as a sin”. In the case of Dubai, Every public transport is being monitored. Therefore, there are Do’s and Dont’s that guide their operation. Some are mild (they are disliked, but if you do them there is no penalty to it), while some can be very severe that they attract fines if caught in the act. So you have to be very careful, but how do you know you are doing the wrong thing if you don’t even know the rules. Below are a few things you should note while making use of the train for travel.

It is very important to note all the above-prohibited acts to avoid unnecessary charges that you can use on better things.

As a visitor, you might wonder if the metro system will be in your favor as to if the route cuts across places you might have planned to visit in the city. This will assist you further to plan your movement perfectly to have that fun-filled experience you’ve always dreamt of. Below are a few helpful information as to metro stations that have provision for parking cars, metro stations that are closer to the Airport as well as shopping malls that are located along the metro lines.

If you own a car or have rented one for your visitation period, and still feel a need to board a train at the metro station due to one reason or another, you don’t need to bother about endangering your car by parking in an unknown place. it is made easy for you as parking lots have been made available for in some metro platforms. With that, the security of your car is assured. Though, only three stations currently have provision for parking spaces (2 on the Red Line and 1 on the Green Line). These stations alongside their capacities are;

Meanwhile, the UAE exchange parking lot is currently under lock, and the re-opening date is yet to be announced.

There is a metro station in the green line called Dubai Airport Freezone station. It does not go to the Airport, it goes to Airport Freezone which is totally a different thing. I have seen many passengers doing this mistake. So please don’t do that.

The popular malls that are found along the Dubai metro lines are;

The first four are directly located on the Red Line, while the last two are situated at the meeting point of both lines.

In addition to the two lines, a new route was launched this year 2020 (represented by the violet lines). This is a 15km route extending from Jabal Ali (previously Nakheel Harbor and Tower) to Expo 2020 site. This new extension cuts across seven stations which are:

The new extension was open to the public in September. With new extensions going on, hopefully, in the next few years, the metro system will be available all-round the city. For the areas that the lines have not reached yet, passengers will have to take a second means of transportation to get to their final destination. But with the improvements going consistently, soon passengers would not need to opt for other means of transport after checking off the train.