10 Things you need to know about traveling to the UAE 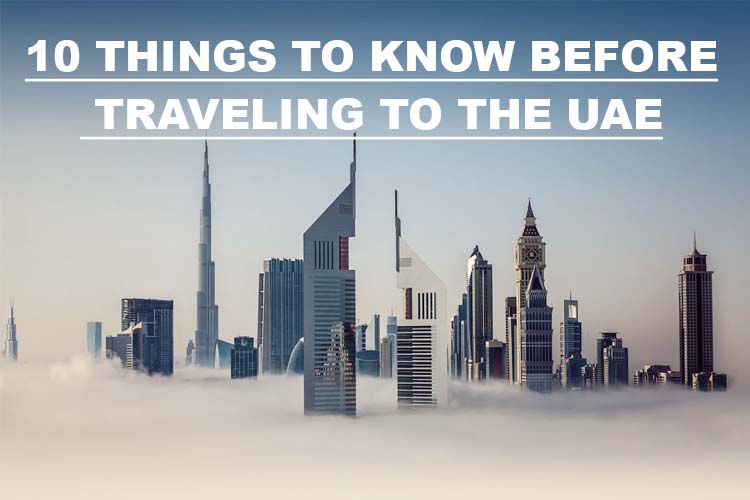 Being a first timer in the country, most travelers have no idea of what the new place holds in store for them. So, to avoid you making mistakes that you might end up regret not taken note of during your visit or mistakes that may lead you to trouble like paying unnecessary fines or something worse, below are a few things to know about the UAE.

No matter how new-fashioned and liberal the country looks, you need to always remember that it is an Islamic dominated country. Its cultures and traditional values are primarily based on Islam. So, the dressing style here is not the kind of western one. The people here believe in dressing modestly, they wear more clothes that make sure to cover shoulders and knees. Wearing clothes that reveal too much skin are seriously frowned at in public, though you will not be sanctioned for it, but trust me, you will get a lot of nasty looks. You don’t need to wear overall clothes like Abaya, just wear something that looks modest enough in public places.

Of course, the beaches are there for you to wear whatever you like, it would look weird not to put on jumpsuits, bikini, and shots on a beach. Just blend in and make sure to dress according to where you are going.

Time of visit (due to weather)

One easy mode of transport you would want to consider is Taxis. Taxis are widely available in the major cities throughout the UAE and are fairly inexpensive. All taxis are metered and can be boarded from the side of the road. Taxis start at 20 AED when taken from airports, and street pickups can be as low as 12 AED. Make sure to have small change with you when taking a taxi, as the drivers will not accept large notes. If you are a female solo traveler it is also possible to use a ladies taxi, they are distinguishable from other taxis by their pink rooftop. Trust me, the country is just full of wonders.

Being a total Islamic country, due to its religious laws, you would find stores that sell alcohol anywhere in the country. Only hotels have the license to sell alcohols throughout the UAE and they only sell to people above 21. So, if you want a few shots, you just have to head to a restaurant or bar within the vicinity of a hotel. Meanwhile, you do not need to book a room in the hotel to eat or drink at its restaurant or bar, you can manage at your small local hotel and stroll out to a bigger one when you feel like having a drink. But you should know it is an offense to act under the influence of alcohol in public or to drink and drive, so remember to drink responsibly.

During your visit, you can consider renting a car for as long as you wish to spend. Car hire is readily available and cheap for a basic car and petrol also is inexpensive. An added advantage is that almost all hotels and public car parks have free parking spaces, and if not, it is very cheap.

However, transiting in public transports is way much cheaper compared to hiring a private car. Some of the excess money can be used in feeding and shopping. Well, if you want a very comfortable experience and you don’t mind spending then you can go for a private taxi. But it is advisable to make use of Google maps as you can’t expect your driver to know every corner of the country. Meanwhile, If you prefer to keep your budget very low, then the metros and public buses are at your service.

One of the things you should avoid once in the country is showing affection publicly even if you are married. Acts like kissing, holding hands, and cuddling is considered unlawful in public. Well, you might find people doing this, especially in tourist areas. However, it is best to always respect people’s cultural values. Meanwhile, You should know that the Emirates in the UAE is less liberal than each other. The Emirate of Sharjah specifically is very strict regarding things like showing affection publicly, you can be arrested for anything more intimate than holding hands. Homosexuality is strictly illegal in the country, if caught, can lead to imprisonment or fine and can lead to deportation.

If you are not a Muslim, I would recommend you don’t travel to the country during Ramadan. During this period, activities are limited as you cannot eat or drink in public during the day, until when the sunsets. Most of the restaurants are closed, though a few of them offer delivery services during this period. Entertainment boosters like music, dancing are prohibited during the month. Parties are suspended, clubs are shut, and you are highly expected to dress conservatively throughout the period. If you can help it, do not visit the UAE during Ramadan. It is simply not an ideal time as a tourist. Make sure to look up online when Ramadan starts and ends, as it changes on the Gregorian calendar yearly.

Being an Arabic speaking country, people always feel not understanding Arabic may be of a great disadvantage to visiting the UAE. Well, it may surprise you, but the larger population of the country especially Dubai is expats from other countries. As it stands, you do not need to know how to speak Arabic at all,

English is the Unofficial language of the country as it is the most commonly used language of communication. Other languages like Hindi, Urdu, Malayalam, and Tamil are popular languages spoken due to the increasing influx of Indians into the country. Merely understanding English is okay to communicate effectively as you will always find someone who can speak English in every parastatal.

Weekends in the UAE

In the UAE, Fridays and Saturdays are weekends. Yes, you read it clearly, here it is not the usual Saturday and Sunday common in the western world. In the UAE, Sunday is a weekday, so you should know how to plan your movements around the city accordingly. Weekends nights are always lit in metro cities like Dubai offering lots of late night clubs, markets, and food lanes, but bear in mind weekends are Fridays and Saturdays.

Limiting yourself to the Metrocity.

Believe me, one of the things you will regret after your tour is limiting your movements just within the emirate of Dubai. Many travelers make this mistake when traveling to the UAE. Dubai is no doubt an amazing city and is definitely worth the time. However, Abu Dhabi has some great sites which include Sheikh Zayed Grand Mosque. Al-Ain isn’t necessarily a popular place for travelers, however, if you do want to see more of the UAE it does have a great zoo located in the desert, an oasis, and a great viewpoint.